We are delighted to welcome all new members to the Awaji Youth Federation Global Community and hope that the next generation selected for our prestigious AYF Fellowship program will arrive on Awaji Island soon. I am filled with confidence and pride that all our AYF Fellows have the potential to go out into the world as great contributors to our global economy and society. I have a vision for this global community and fellowship program, and for the future of all those involved in guiding, building, and leading it. This program will propel members of the Awaji Youth Federation forward in their journey through life as they live, learn and work both here on Awaji Island and virtually online in a global community based on diversity, innovation and mutual respect.

One person alone may not have much influence on the world but making meaningful connections with others transforms the power of one into the power of many. For over 40 years, the Pasona Group has been dedicated to solving the problems of society. We have created diverse job opportunities for a variety of people including housewives, university graduates, the middle aged, people with disabilities, artists, musicians, athletes, and others. We work to create a society where everyone can find a career that complements their personal goals. As the world comes face to face with the global COVID-19 pandemic, now more than ever, the ambitions, hopes and achievements of the next generation of creators, innovators and thinkers all over the world gathered together under the banner of the Awaji Youth Federation are indispensable in paving the way for future generations to come. They will face the challenges of today and the years to come with the passion, determination and courage needed to make the world a better place.

Before arriving at Johns Hopkins SAIS in 2003, Professor Calder served as Special Advisor to the U.S. Ambassador to Japan, Japan Chair at the Center for Strategic and International Studies, Professor at Princeton University, Lecturer on Government at Harvard, and as the first Executive Director of Harvard University’s Program on US-Japan Relations. He received his PhD from Harvard University in 1979, where he worked under the direction of Edwin O. Reischauer. A specialist in East Asian political economy, he has spent eleven years living and researching in Japan and four years elsewhere in East Asia. In 2014, Professor Calder was awarded the Order of the Rising Sun, Gold Rays with Neck Ribbon. His most recent works include Super Continent: The Logic of Eurasian Integration (Stanford, 2019) Circles of Compensation: Economic Growth and the Globalization of Japan (Stanford, 2017); Singapore: Smart City, Smart State (Brookings, 2017); Asia in Washington (Brookings, 2014); and The New Continentalism: Energy and Twenty-First Century Eurasian Geopolitics (Yale, 2012).

Mr. Otaka joined Toyota upon graduating from the Faculty of Law at the University of Tokyo in 1965 and spent nearly his entire career in international operations. After serving as Executive Vice-President of the Toyota Labour Union in the 1970s, Mr. Otaka worked six years in Toyota Motor Sales in Washington, responsible for government affairs, and then in Los Angeles responsible for product PR in the 1980s.
He was General Manager of Global Marketing as well as Sales and Production Planning in the 1990s, and was named to Toyota`s Board of Directors overseeing global business.
Mr. Otaka served as the President and CEO of Toyota Motor North America from 2004-2006, prior to which he was President and CEO of Delphys. the marketing and advertising arm of Toyota.
Currently, Mr. Otaka serves as a Board Member of Key Safety Systems (America) and as the Vice-Chairman of the Pasona Group, Inc. where he also has responsibility for leading the Awaji Youth Federation along with the other members of the senior management team.

Ms. Akemi Aota is the Chief Executive Officer of the Awaji Youth Federation. She was formerly an instructor for Japan Air Systems; following this she moved to Hong Kong to work for Cathay Pacific Airways where she became a First Class Purser. In 1987 she joined Pasona Hong Kong to enhance her career in teaching and training and was later appointed Chairperson and Principal of Pasona Education Co. Limited. In addition to her active roles in education and training in Hong Kong, her extensive business background has earned her international titles such as Executive Officer of Pasona Group Inc. as well as Managing Director of Pasona Asia Co. Limited.

With her professional knowledge and extensive background in global business, she has conducted business training seminars and cultural activities throughout Asia. In particular, her work has focused on developing and nurturing young people to help them achieve their dreams in the international market. Many of her training courses focus on cultivating a global mindset, leadership training, and cross-cultural communication; she has also offered and supervised internship positions to university students. As a result, thousands of people have been inspired by Ms. Aota and have maximized their potential and abilities.

A former diplomat, Ms. Elizabeth Masamune has served in senior trade roles at the Australian Embassy in Tokyo, Seoul, Jakarta and Hanoi. In recognition of her pioneering work in Asia, she was awarded the prestigious Public Service Medal (PSM) by the Australian Government in 2006.

Elizabeth currently serves as Senior Executive Advisor to the Pasona Group, and Senior Managing Director of the Awaji Youth Federation.  She is a passionate advocate for supporting working women in business, developing the next generation of global leaders, and promoting cultural diversity. Elizabeth also serves as a Non-Executive Director on the Boards of 2 TSX listed Japanese companies, Faith Inc and Osaka-based Arakawa Chemical Industries.

She is a member of the Management Advisory Board of Chiba University, and acts as Coordinator of the Future Leaders Program within the Japan Australia Business Cooperation Committee. Elizabeth also devotes time to charitable work through social business as a director of Dana Asia Ltd, a charity registered in Sydney and Singapore.

Elizabeth holds a Bachelor of Arts (Hons) from Monash University, and a Master of Literary Studies from the University of Queensland in simultaneous interpretation and translation of Japanese.

Founded in 1976, Pasona Group is a leader in Japanese employment and staffing solutions. Since its establishment, Pasona Group has maintained the corporate ideal to solve societal problems by harnessing the potential of each job-seeking individual, with its mission being to continue embracing challenges with high aspirations and dedication toward creating a new social infrastructure.
This includes helping people find work they like and complements their personal goals; creating a society in which individuals can freely exercise their talents through an egalitarian relationship with their workplace; and promoting diversity whilst continually creating opportunities for individuals to achieve their dreams.
In recent years, Pasona Group has taken on the challenge to create new jobs by attracting human resources to rural areas, including Awaji Island, Kyotango, and Tohoku. The aim is to revitalize regional industries by bringing together people with diverse talents. By cooperating with local governments and businesses, Pasona Group is working toward ongoing revitalization of rural communities across Japan, based on the themes of Japanese culture, history, food, and health.

Check below for more information 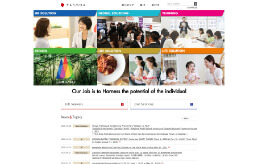 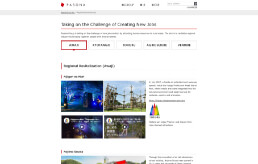